GRASSLANDS THRIVE ON THE 33 RANCH

I headed down the gravel road through open country that was framed intermittently on both sides by large cottonwoods and willows. These massive old trees threw shade over languid creeks harboring snapping turtles and waterfowl floating lazily along with the current. Across the horizon, I could see badlands formations rising-up to scrape the sky. I found myself increasingly lost in the spell of the place.

I had first visited South Dakota when I was 18. Back then, the prairie felt so foreign to me. Growing up in the east, I was accustomed to dense hardwood forests pocketed with rich coves and rhododendron thickets. It was my maiden voyage into the west, and I felt both elated by a landscape that was so new to me and a bit exposed under an endless sky that baptized and blanketed me in its immensity. I’ll never forget the night that my friends and I slept under the stars on a church lawn just outside of Rapid City. It was the peak evening of the Perseid meteor shower, and I couldn’t believe the continuous display of celestial fireworks. An elk bedded down on a nearby hillside. Filled with wonder, I drifted into a deep sleep.

Back then, I wasn’t aware of the complexities of the prairie, or the effort that ranching families put into keeping them intact. I only saw land, sky, and wildlife. Although it seems obvious to me now, I didn’t realize back then that grasslands must be grazed if they are to remain healthy. Nor did I understand just how many amazing species of plants and animals live hidden lives within this vast landscape, not to mention the value of intact grasslands for preserving water and carbon. Nearly 25 years later, the prairie continues to teach me. Its lessons can be slow to materialize, but deeply profound.

After a couple of wrong turns, I pulled past the black iron sign and onto the long gravel driveway that led to the 33 Ranch, just outside of the little town of Belvidere, South Dakota. The ranch was established in 1914 when Dan Rasmussen’s grandparents arrived from Nebraska with 33 cattle and a lot of determination. It was a place that offered promise, with rich fields of native grasses firmly rooted above hidden badlands shelves.
Today, the original holding encompasses nearly 20,000 acres that includes both owned and leased pastures.

The long drive into the 33 ranch was surrounded by rolling grasslands., © WWF-US / Clay Bolt

Prior to the visit, I had learned to love the ranch vicariously through the stories that Dan’s daughter Kate had shared with me while she was interning for World Wildlife Fund’s Sustainable Ranching Initiative. During her time with our program, Kate wrote “Sustainable ranching is truly a rare type of business. Our long-term survival on the ranch directly correlates with the quality of wildlife habitat in which it’s held. Healthy prairie ecosystems grow fat cattle, fat cattle grow stable ranches, and stable ranches grow wildlife havens. If we take care of the land, it will continue to take care of us.” It was with this sentiment in mind that I knocked on the door of her home.

It was great to see Kate again and to formally meet Dan, who by that time had already been an advocate for sustainably produced, grass-fed beef for many years. The Rasmussens were kind enough to allow me to spend a few days poking around their place, photographing the plants and animals that I encountered. This was my first field day for WWF’s Rangelands Alive! Project; a project whose mission is to showcase the overlooked and wild beauty of one of the last remaining grasslands in the world and increase the awareness of the families who work tirelessly to maintain them. For the next few days, from sunup to sunset, I would be exploring the pastures, bluffs, and badlands of the ranch, photographing species that spent their days living in harmony with the cattle that grazed and helped maintain the landscape. 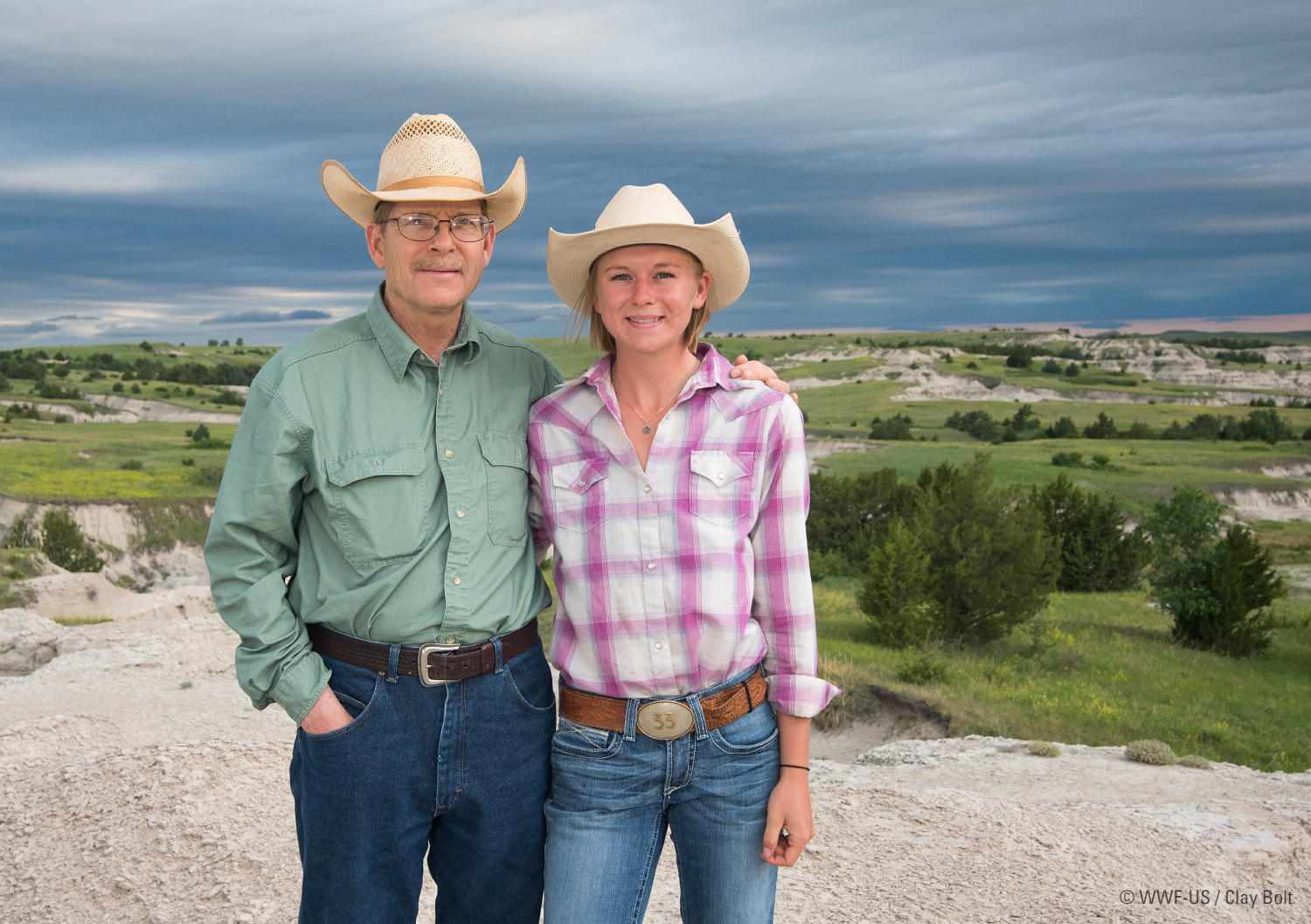 After settling in late that first afternoon, Kate led me to a meadow situated between a small stand of trees and a towering badland spire. I unpacked my photography gear and began to search for grasshoppers and flower loving insects. Grasshoppers are often despised by row crop farmers because of their voracious appetites, but for the grassland ecosystem, they are one of the most important food sources for songbirds, small mammals, and other invertebrates. Even raptors such as Swainson’s hawks, burrowing owls, and American kestrels regularly feed on them.

If you sit long enough in any patch of grass and watch very closely, it won't be too long before you begin to realize just how much life is around you. As I photographed my first grasshopper—a beautiful, lemony yellow creature—I noticed a large crab spider sitting camouflaged in an Aster; a fly clamped firmly in its jaws. At my knees, a host of ants made their way through the clumps of foliage, and the last song of the meadowlarks filled the air. Not too far away, I discovered a dung beetle grub with amazing translucent skin and a rust-red head, transforming a cow pat back into fertile soil. Even in those few unremarkable meters of grass and prairie soil, life was thriving. 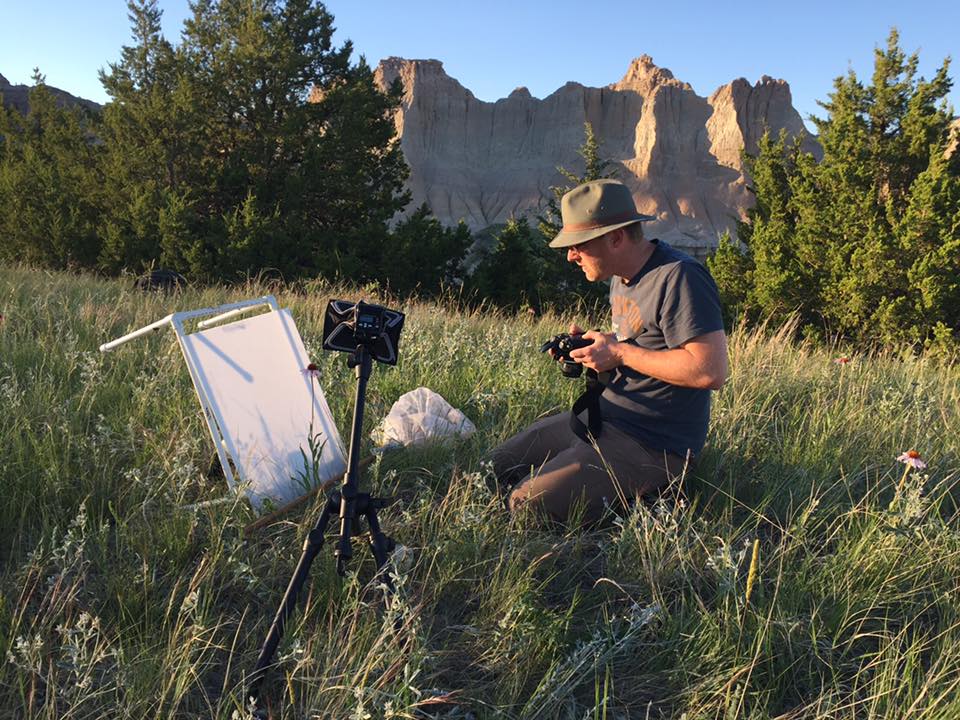 Clay Bolt photographing wildflowers and insects at 33 Ranch, © WWF-US / Jesse Tufte
A selection of grasshoppers photographed on the 33 Ranch

Much of the wildlife that lives within the Northern Great Plains is especially adapted to living deep within the grasses. Species such as grasshoppers that may be taken for granted or even eradicated in some locations are actually a vital part of the food web for many grassland birds, mammals, and other invertebrates. After searching within a few meters of grassland on the 33 Ranch several species of grasshopper and other insects were discovered. Here, they are allowed to remain as part of a healthy ecosystem.

A crab spider traps a fly 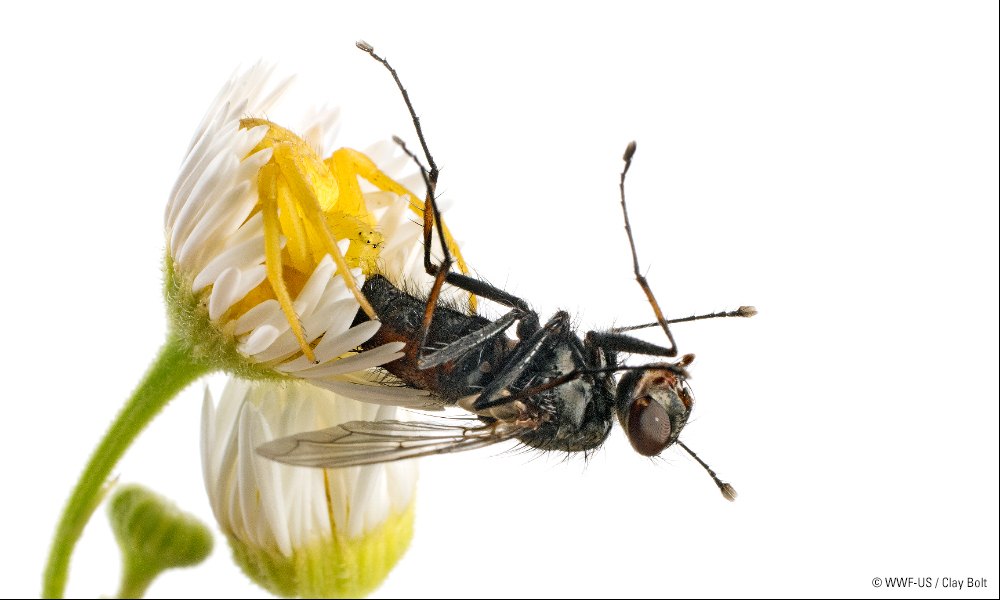 Grassland spiders, such as this crab spider, keep populations of flies and other insects under control. Crab spiders are masters of camouflage. 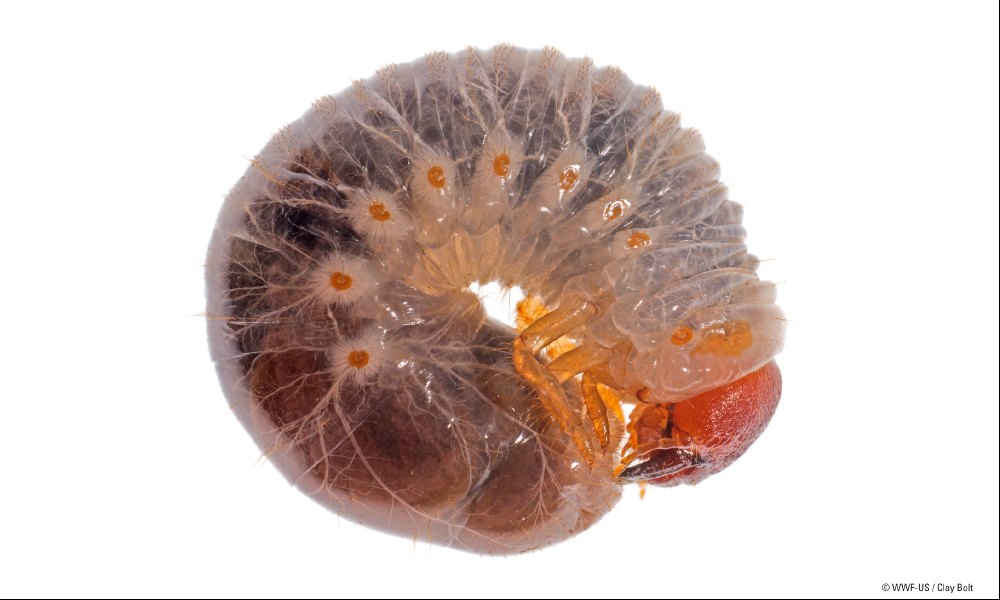 Dung beetles are a vital member of the grasslands ecosystem, as they recycle droppings from grazing animals back into soil and fertilizer for grassland plants. 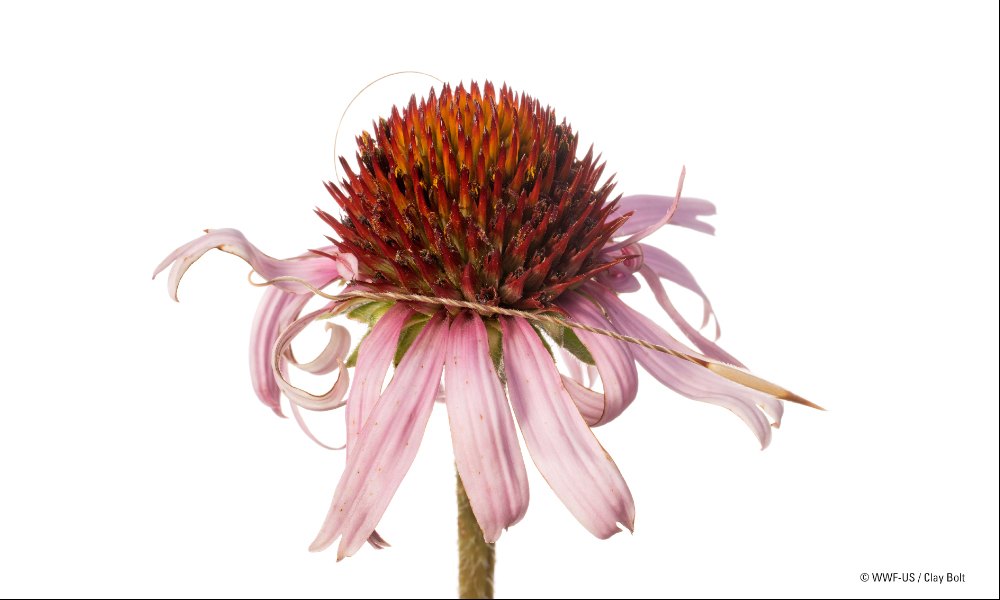 Purple conflowers are a sign of a healthy grassland. The tan seed that is attached to the flower is of needle-and-thread grass, which has evolved to be corkscrewed into the soil through the force of the wind, essentially planting itself.

Night soon fell; the boom of nighthawk wings and the lazy chirp of crickets played out the end of my first field day. Down in a nearby gulley, Kate made a small fire just out of reach from the increasing wind, its smoke rising high into the heavens. The stars were bright, and I could see the grand expanse of the Milky Way. I couldn’t help but reflect on how magical this ranch—a place that some would blindly characterize as antithetical to nature—was.

Later that evening, over a delicious curry dinner (Dan had spent time in India during his youth and was quite the cook), the three of us discussed what it takes to keep a ranch going. I was reminded through our conversation that most ranchers do what they do for a living because they enjoy communing with the land. It can be stressful, unpredictable work, and very few producers are getting rich. However, the joy and reward that come from taking care of the grasslands, and the family traditions that ranching represents, make it all worthwhile in the end, even if sleep comes slowly some nights as worries about impending weather and leases nag on into the late hours.

“Sustainable ranching is truly a rare type of business. Our long-term survival on the ranch directly correlates with the quality of wildlife habitat in which it’s held."

After the dishes were washed and put away, I laid in bed downloading my first set of images, anticipating what I might find in the days to come. Each insect or flower that I photographed would become an ambassador for their grassland home, and emblematic of the life that thrives under the watchful eyes of a ranching family working diligently each day to honor the land. I couldn’t wait for morning to come so that I could spend more time exploring the ranch.

Visit next month for part two of this series.